Each of us at the beginning was walking own path; then, after our meeting on rocks, we began to walk the same path. In the beginning, it was very intense, competition, studying, work and travel for a few years. Pretty soon, we knew that we would like to work in the climbing world. But at a start, Klemen was competing in the world cup and coaching young perspective climbers. Klemen has an incredible skill to coach people, all ages and kids. Anja worked as a massage therapist and Klemen as an athlete in the national climbing team. We were coordinated competition season with climbing trips as much as we could. After a few years of traveling, we discovered many places in Europe to climb, places to live, and meet best friends. In wintertime, we usually spend our climbing holidays in Spain, most of the time in Catalunya. We felt so good there that we started to think about business there. So we moved to Spain in 2015, and after two years of working on a business idea, we didn't succeed, but we have got a lot of experiences. Klemen often was route setting in Barcelona; we had some climbing coaching, renovating a house for climbers to rent. Besides climbing coaching, we wanted to offer accommodation, massage, photo shooting, and sometimes yoga with other partners in the region North of Catalunya. That is the best place for climbers with great climbing crags around, including the hardest climbing spot in the world, sector Oliana. Things didn't go in that direction, but we met a business partner Rockbuster, with whom we cooperate today. Together we coach people to climb better around Europe. In 2017, we founded our company Plezanje, Klemen Bečan s.p., aimed at individual coaching climbers, especially amateurs, advanced climbers who want to improve their climbing. Klemen is specialized in climbing coaching techniques, and he is one of the best coaches in the world. Klemen recognize mistakes right away and help people to improve. Anja is very good at coaching the mental part of training, which gives much advice from her experiences.

Together we stand on our side; we always think positively to find a common solution for a problem. In sports, there are highs and falls. Because we are both aware of this and we know how to cope with these pressures.
This lifestyle has been dictated to us for more than 25 years. We are both adventurous in a soul, we are social and love to help people, we like nature and use it as much as possible. Our relationship is based on respect, friendship, loyalty, and love.
We have dedicated ourselves to photography, which is also part of our mission. The common path has been consolidating for many years and is complementary in the sports and spiritual spirit.

"Enjoy climbing, no matter what." 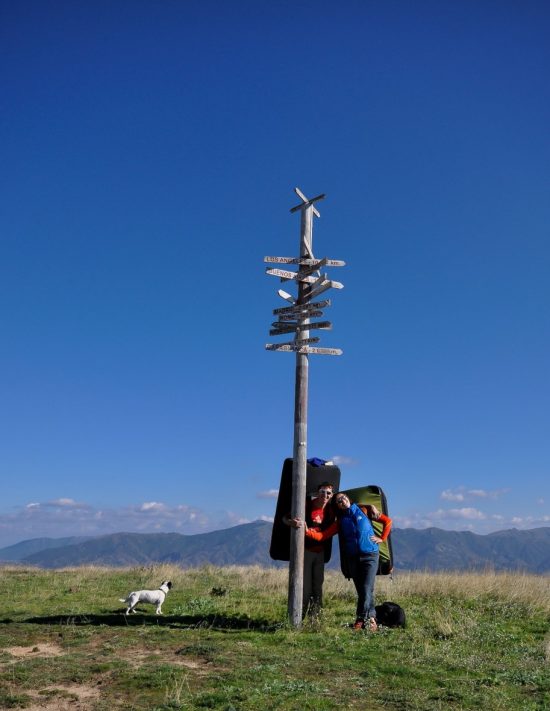 We have always felt our mission path to creating a very good climbing and comfortable community for everyone who adores the walls and nature.
The most important thing for us is to create a good and homely atmosphere among people and to make people happy.
Therefore, the company will complement the man who teaches climbing, both through climbing tourist organizations and individuals who want to acquire new knowledge and improve their climbing technique and form and life.

The company strives to fulfill all the climbing wishes of its customers and climbers to improve their climbing and get answers to questions from the climbing world while remaining happy and healthy.

We have a big passion for climbing along the natural walls, and we love to show to people, which we also delight them.

Klemen tried climbing for the first time when he was 7 years old, and since then, that's all he ever wanted to do. He joined the local competition team at the gym at age 10 and focused all his time and energy on training. At age 14, he started competing internationally on the Slovenian Youth team. At age 15, only one short year after joining the team, he won the World Championship Youth Gold Medal in lead climbing.

Soon, he joined world cup competitions in the absolute category, and in 2008 he finally got to the top spot of the podium at the World Cup competition in Kranj, Slovenia.

He loved competing, but climbing outdoors on real rock is always where he finds the most satisfaction and pleasure.

Klemen prefers on-sight climbing. He thinks it captures the essence of climbing. You have to adapt and make on-the-fly decisions, which train the mind and body to be at its best, on and off the rock, and these lessons transfer to your everyday life.

His hardest on-sight is Siempre se Puede Hacer Menos (watch video), where he did the on-sight first ascent.

He doesn't like spending much time working routes but still climbed some hard routes graded to 9a+ like Joe Mama, Papichulo, and La Rambla.

Klemen likes long routes a lot. The longer, the better. So no wonder he equipped a new multi-pitch line in Drašnice, Croatia, which is around 250m high and has two pitches graded 8c+. It is his favorite route. Check out the video of Drašnice Moments.

In his 30 years long career, he gained tremendous knowledge from competitions, training himself, and young perspective climbers. After a competitive career, he shares all his knowledge with people on his climbing coaching destinations. Join him for a day, a week, or a month, and after spending time with him, you will climb better and feel stronger, be more aware of your full potential, and have a greater appreciation for all the things he loves, including some amazing cooking outdoor. 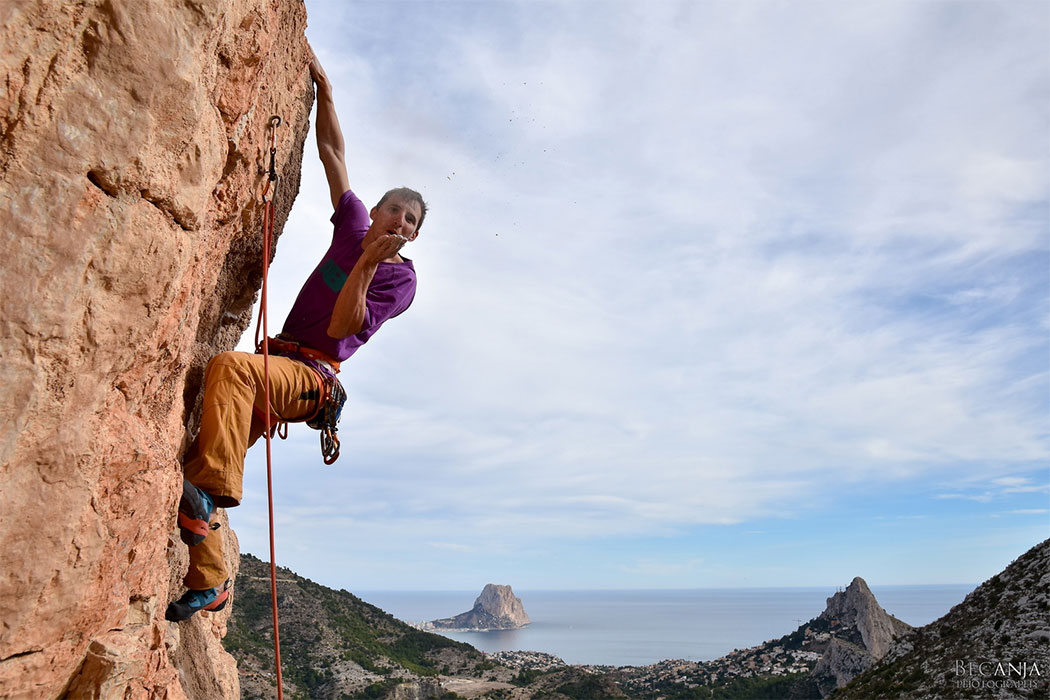 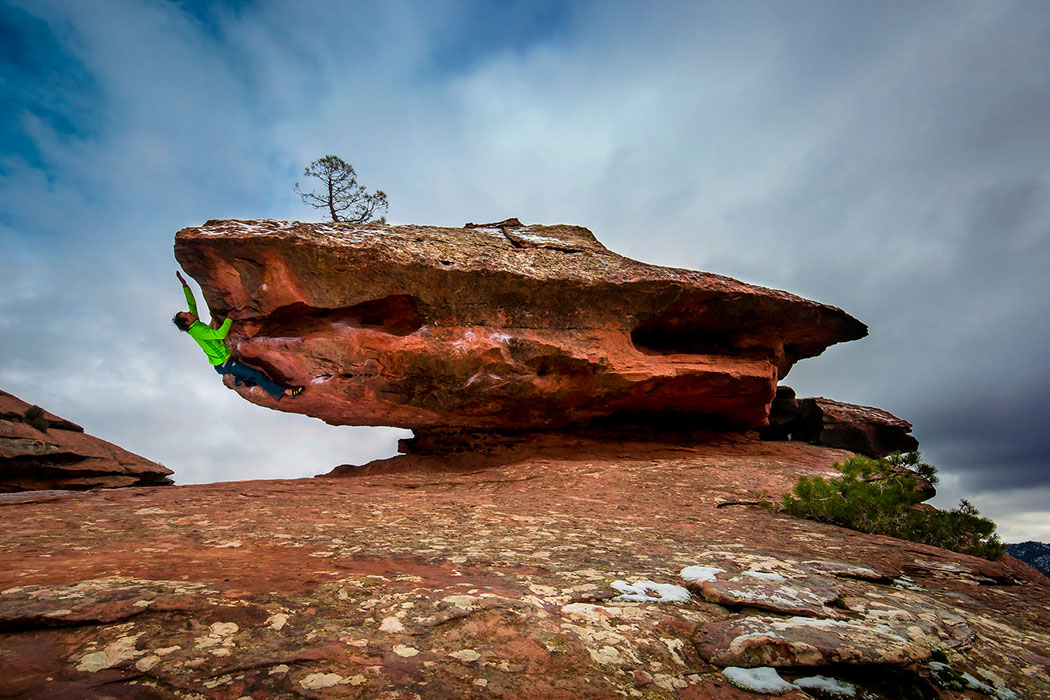 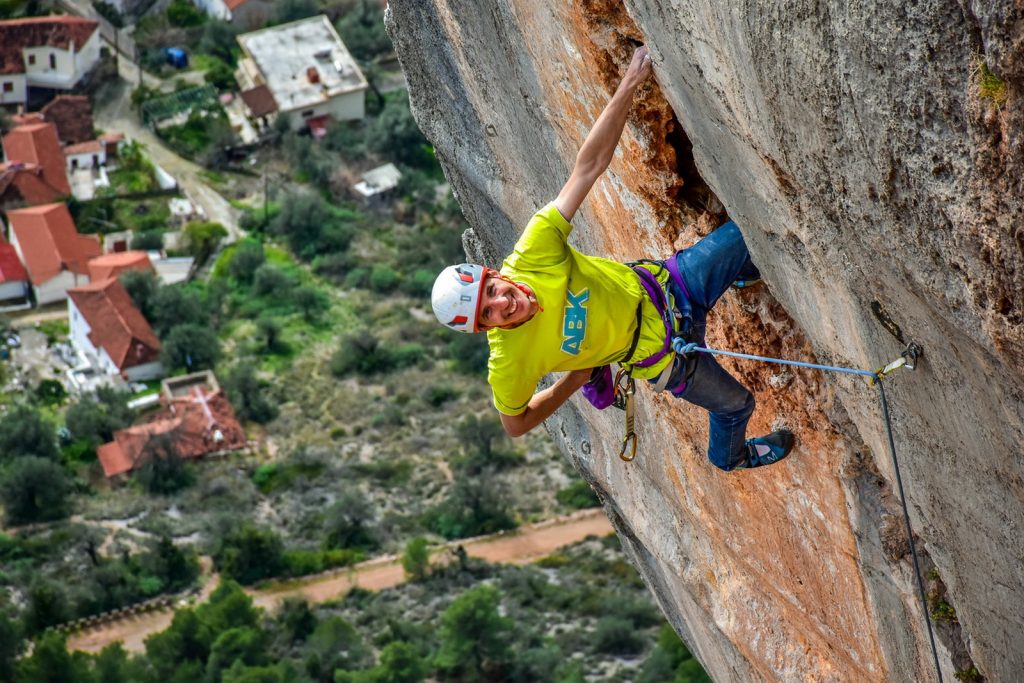 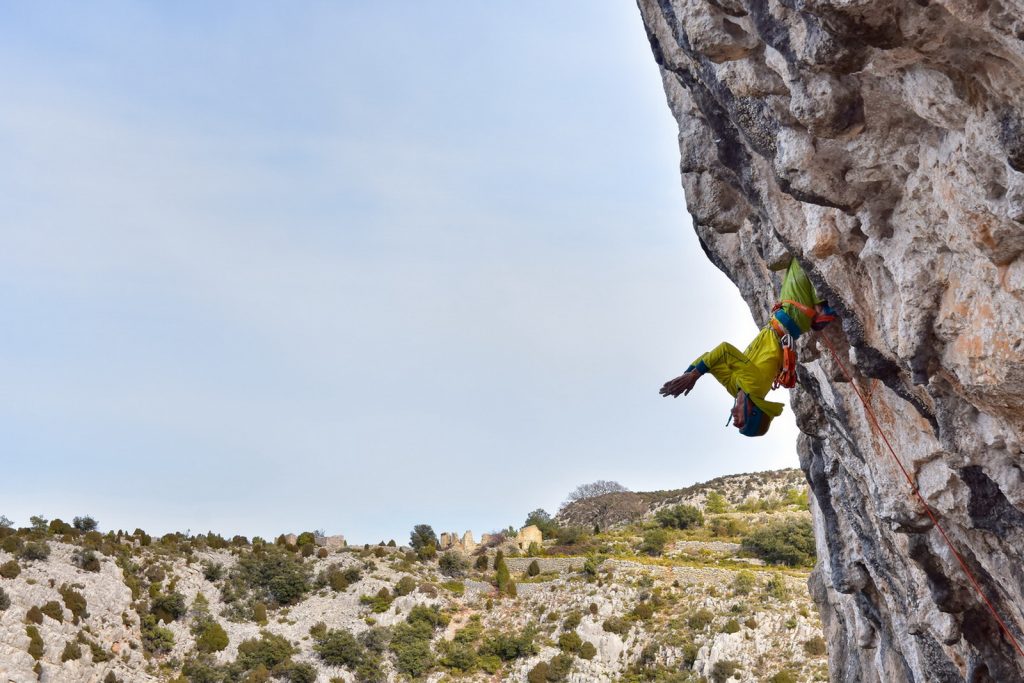 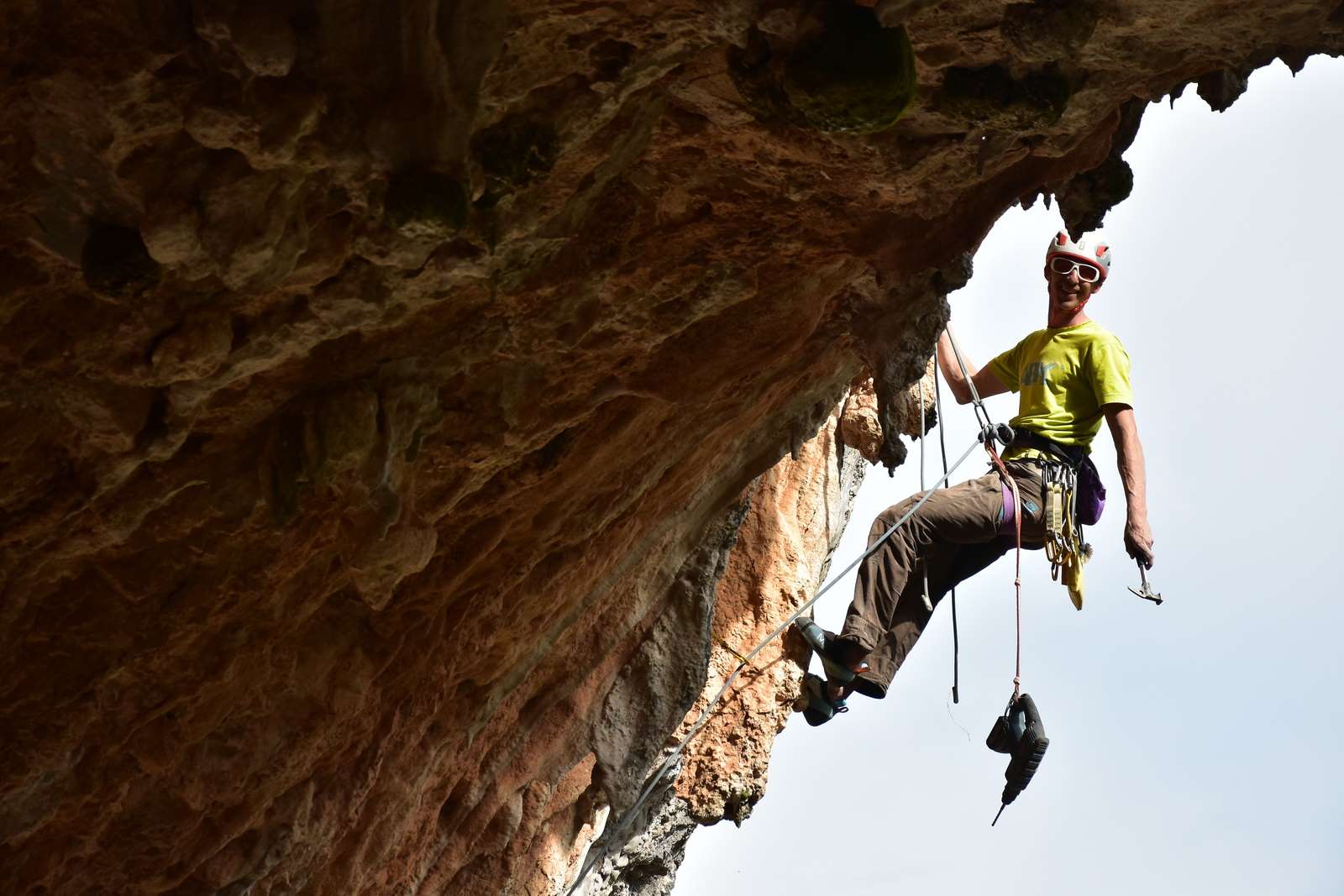 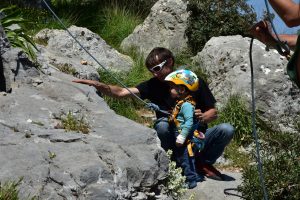 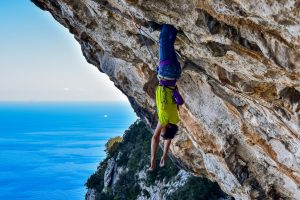 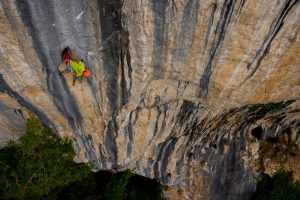 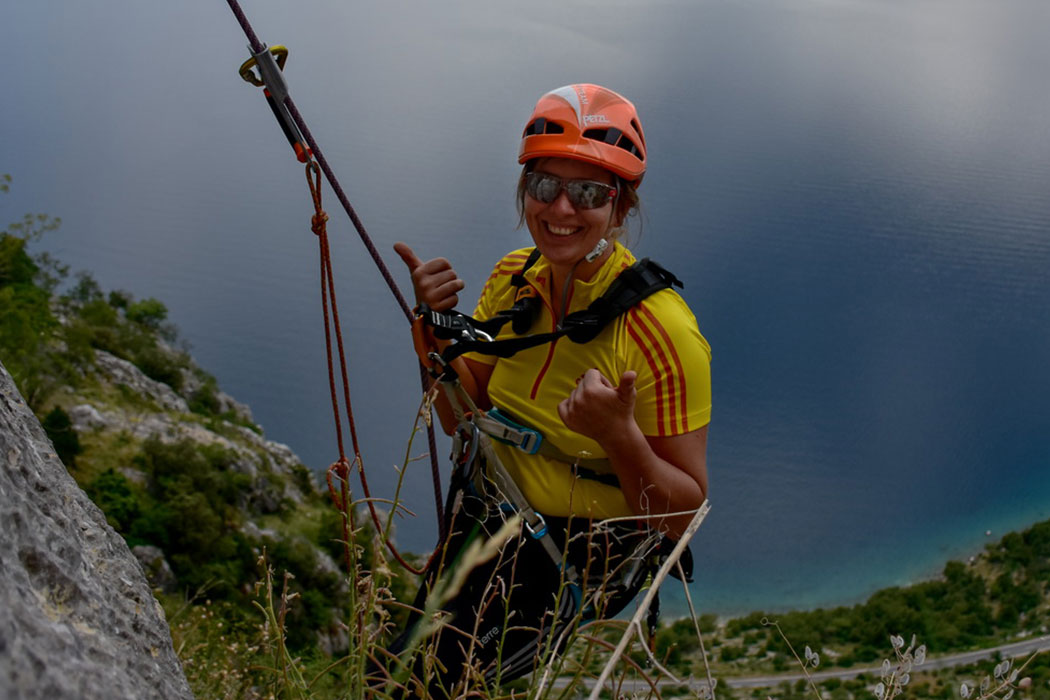 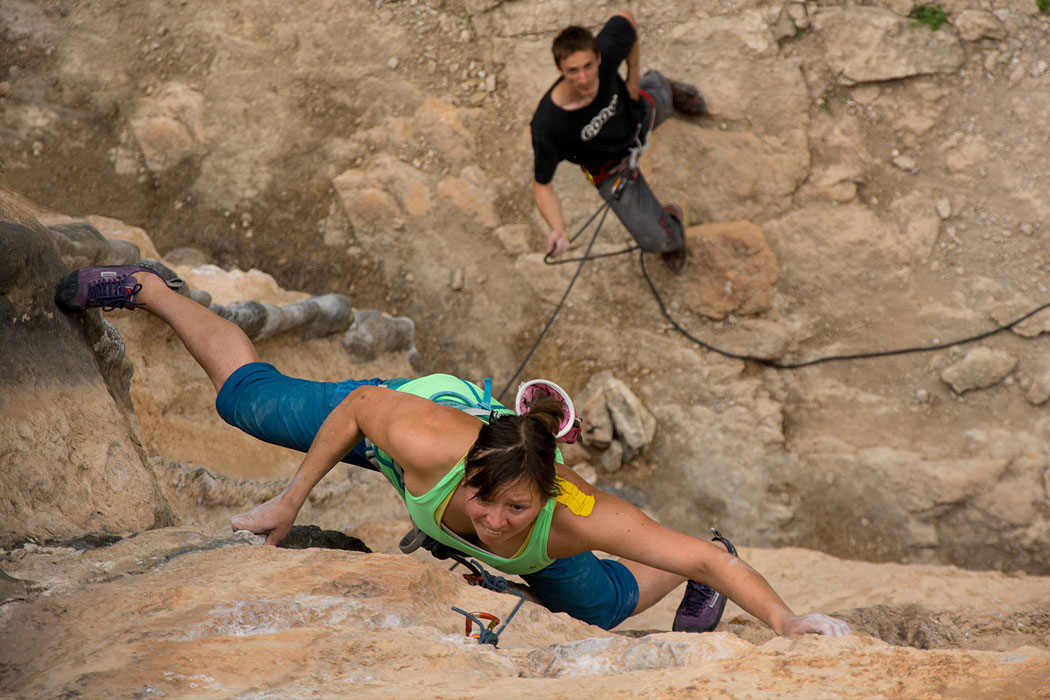 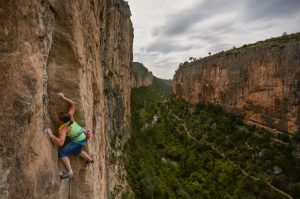 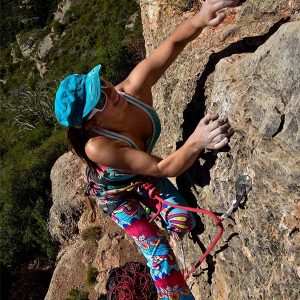 Anja was born in the capital of Ukraine, in the big city of Kiev. At the age of five, the whole family moved to a small country, Slovenia. The reason for leaving the larger country was my father's job as a professional hockey player. As a child, she trained in many sports, mostly dedicated to athletics, and eventually, at the age of 17, she discovered rock climbing. Soon climbing has slowly become her lifestyle. The beginning of climbing began in the home Alps, winter snowboarding, alpine, and ice climbing. But she soon learned sport climbing, then traveling, and exploring new places where she met Klemen. The first meeting with her future husband was at the age of 19, where they went climbing together, and she threw him a stone, but fortunately, she hit only his shoulder. They haven't seen each other for five years. Anja studied and graduated as a radiology engineer. In the middle part studies, she worked as a massage therapist in a family business. The 2nd meeting with Klemen was in their massage saloon, where the magic happened. Klemen and Anja got married one year later and bought a T4 van, named it Blue Arrow. The Blue Arrow was brought from Germany, and Van's journey began. Everywhere in Europe, west to Spain, then traveled to Turkey and northern Germany through all the Balkan countries. Blue Arrow gave them beautiful adventures and memories for 10 years.

If we go back to Anja's story. Her climbing with Klemen was intertwined with travel, climbing, and work. In 2010, she discovered another passion, and it was the beginning of climbing photography. Photographing her husband was a very big challenge because of the hard rope technique and hanging from the walls. Soon, she has stepped into professional photography, and her works were published in many magazines, guidebooks. In 2020 she learned to photograph real estate. Climbing photography is her life's work at her climbing destinations everywhere and has become part of Klemen Becan's Climbing coaching destinations.

Not only is her passion for photography, but she is also good at sport climbing with a red point 7c and a 7a + on sight. Over the years, she began to engage in independent training and discovered another excellent work of helping and teaching other climbers in their company. Her excellent article on the first 7c she submitted was one of the best articles on mental work.

Today with her husband Klemen, son Aron and dog Mali are traveling, exploring and developing new climbing areas, coaching and climbing courses, photography, everywhere on the way are her way of living.